Your Kiteboarding Resource for the San Francisco Bay Area

Ocean Beach — On October 28, 2012 John Suarez was surfing with an unidentified companion at South Ocean Beach, San Francisco, near the parking lot at Sloat Street. It was 8:30 AM and he had been on the water about 75 minutes. There was a light fog with an undetermined number of surfers in the area. The ocean wave faces were running 3 – 5 feet. No marine mammals were observed in the area. Suarez reported; “I saw a shark yesterday morning while surfing. I was sitting on my board waiting for a wave when I saw a dorsal fin, approximately 1.5 – 2 feet high, about 150 feet away coming straight at me from the North-North-West. I saw it for a split second, turned and started paddling for the shore, and came in. My impression was that it was a coincidence that it was coming in a direction straight at me, but I didn't want to stick around to find out. I have seen dolphins many times and I am sure this wasn't a dolphin. I found my friend nearer to shore and told him to come in too. I told a couple of other people on shore and in parking lot, but most of them went out to surf anyway. I was surfing near a rip current and had just paddled South East to get out of it, and I think that is where I spotted the shark, in or near the rip current.”

Well, screw surfing for a while. Too many sightings and attacks lately. I found TOPP migration patterns for these animals. Winter is no bueno. 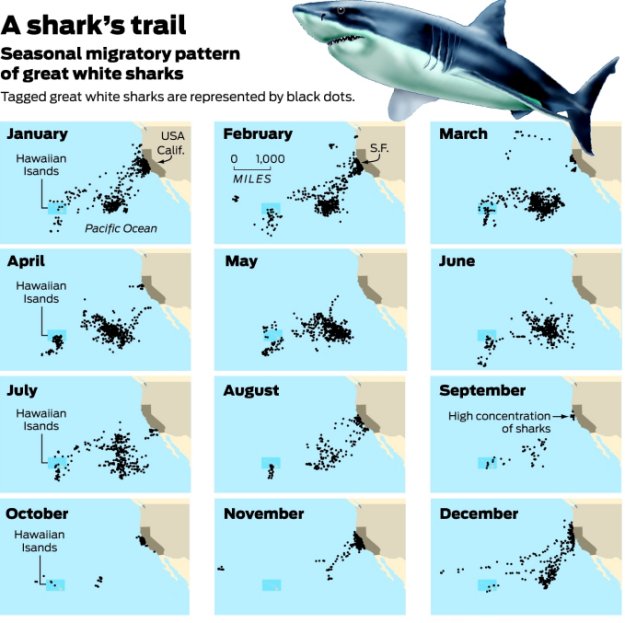 ...but the waves get so good now

We surfed Waddell Saturday morning - fun playful conditions but for some reason there wasn't too many people there
www.ridethetrack.com
Top

Etxxz, thanks for posting that link.
This website has a graph of shark attacks grouped by Month for the Pacific Coast, September having the most number of attacks, the majority of them being on divers:
http://www.sharkresearchcommittee.com/statistics.htm 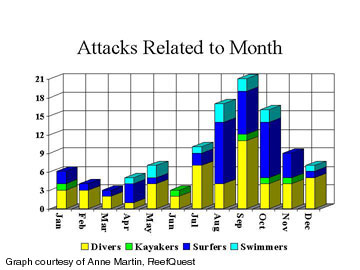 The majority of attacks on Surfers & Swimmers occurred in August through October. Shark week conviently airs each August to remind us that the waters are sharky again.

I never hear about divers get attacked .>
Top

yup. they dress up like seals and go in the ocean looking for seal food.... go figure.
Top

There are several things about a scuba diver that make them appear to be rather unappetizing
www.ridethetrack.com
Top
Post Reply
20 posts

Users browsing this forum: No registered users and 2 guests